Thanks to our Google Alerts (which notifies us whenever we are mentioned on the internet) I just got word that we were written up today on the American Pride, American Products Blog. They review American Stores and American Manufactured Products and found our farm and store through Twitter.

You can read the entire write up here.
Posted by Golden Touch Farm at 2:39 PM No comments:

Documentary: Fridays on the Farm

Feeling disconnected from their food, a filmmaker and his family decide to join a community supported organic farm. As he photographs the growing process, the filmmaker moves from passive observer to active participant in the planting and harvesting of vegetables. Featuring lush time-lapse and macro photography sequences compiled from nearly 20,000 still images, this personal essay is a father’s meditation on his blossoming family and community.

PRIVATE ON VIMEO - USE PASSWORD “fridaysscreener”
Posted by Golden Touch Farm at 11:52 AM No comments:

HR 875 - The Death of Farmers Markets, CSAs and Local Food

From the Nourished Kitchen:

HR 875, also known as the Food Safety Modernization Act of 2009, was introduced by Rosa Delauro - a democratic party member of the United States House of Representatives from Connecticut - in February of 2009.  The title of HR 875, The Food Safety Modernization Act of 2009, sounds innocuous enough - even comforting, but its implications yield a much, much different story.

HR 875 as it is written today, could very well mean the end of the vibrant and growing local foods movement.  Yes - if it passes - it could herald the death of farmers markets, most CSAs, farmstands and even small family-run farms altogether.

Ostensibly, HR 875 or the Food Safety Modernization Act of 2009 would bring greater accountability to our imperiled food system.  Indeed, with salmonella-infected peanuts and spinach laced with e-coli, who isn’t crying out for improvements in food safety?

However, HR 875 fails miserably in promoting food safety.  Rather, than promoting true accountability and proper farming techniques that minimize the risk of introducing pathogens into the food supply, it simply will create greater barriers for our already struggling small farms and farmers markets.

HR 875 mandates that anyone who produces food of any kind - meat, milk, fruit, vegetables et cetera -  and transports that food for sale be subject to warrantless government inspections of their farms and food production records.  These random inspections can be conducted at the whim of federal agents without regard to farmers rights or property rights.  Further, the law would allow federal agents to confiscate records, product as they see fit as part of the inspection process.

Agents could also implement draconian restrictions regarding how farm animals can be fed, how fields can be managed and the end result of these restrictions could mean the end of organic, biodynamic and sustinable agriculture practices as these practices are deemed “unsafe.”  Farmers refusing to comply would be subject to penalties.

Posted by Golden Touch Farm at 10:42 AM No comments:

Burrr! Just when you thought it was safe!

We were spoiled with a beautiful weekend and silly us, we expected it to stay like that! For a second there, I forgot we live in New England. As the saying goes, "If you don't like the Weather, just wait a minute." Unfortunately that holds true the other way around, if you are enjoying the Weather, know that it can vanish in just a minute.

After looking at the U.S. forecast it looks like a lot of you are getting Rain Today, whenever it is gloomy around here I always watch some of our Farm Videos from Summer to cheer me up - here is a small collection of our Hummingbird Videos we shot last year - can't wait until they come back!

You can also see our Videos in High Definition here - http://www.vimeo.com/goldentouch/videos

Posted by Golden Touch Farm at 9:55 AM No comments:

We are going to try and keep it as informational as possible, while providing everyday updates about us and the animals, as well as current sales and events going on at the Farm Store!

P.S. - We are running our first Twitter Sale now - Find out the coupon code at twitter!
Posted by Golden Touch Farm at 2:02 PM No comments:

The Weather has been great in New England this week and I figured it would be a great time to sneak away for a field trip with my new Grand Daughter. She slept the entire time but my daughter and I had a wonderful time. Our Farm Vet and Good Friend Peter Brewer owns Southwick Zoo of Menden, MA and a few weeks ago he called to fill me in on their new bundle of joy, Molly - a 3 week old giraffe.

Peter is absolutely ecstatic over her - and I can't blame him. Yesterday I saw her for the first time and she most certainly carries herself well. She has recently been featured on Good Morning America and the Boston Globe because of an infection that endangered her life.

Here is a blip from that article:

"After fighting off an infection, 3-week-old Molly the giraffe is back home at Southwick's Zoo.

Molly's veterinarian, Peter Brewer, said she probably had an umbilical infection she could not fight off. Molly's mother could not produce milk, he said, and zookeepers instead fed her cow's colostrum, a nutrient-rich milk produced right before and after birth. Brewer said it's usually effective.

"But when she went off the cow's colostrum, she had low white blood cells and got the infection," he said. "We brought her to Tufts University Veterinary School in North Grafton to get her better before it became severe."

Brewer said since Molly came home about a week ago, after a one-week stay at Tufts, her health has improved.

"I took blood from her the other day and her white cells are back up," he said. "She is eating well and we hope she is out of the woods."

After several weeks There is a playfulness and charisma behind those big beautiful eyes - she is in wonderful shape!"
Posted by Golden Touch Farm at 10:15 AM 2 comments: 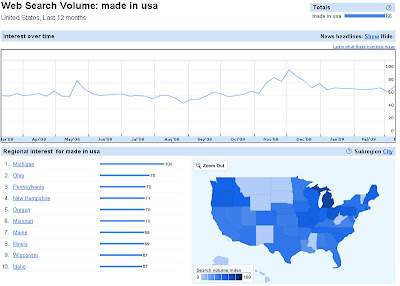 Recently we have discovered Google Insights which is a great way to gauge internet search trends for certain keywords, which are then mapped out for you. This is a great tool to find out what terms and ideas are growing in popularity. For us in particular, Made in USA is important as we are committed to keeping all of products made in this country by Certified Green Manufacturers. As the country gets back to the basics, more and more people are realizing the importance of supporting their local and regional economies.

When you have some free time head to Google Insights and do some of your own investigation work, it just might help you plan that next big regional marketing push!

Posted by Golden Touch Farm at 12:34 PM No comments:

We are happy to announce the addition of a brand new sock to our Fiber Nook and Online Farm Store.

Our Casual Dress Alpaca Socks combine the durability everyone loves about our Survival Socks with a lightweight knit so you can enjoy your alpaca socks in every season! The Upper Calf and top of the foot is a lightweight alpaca knit to keep your feet the perfect temperature while the bottom of the foot has an Alpaca Terry Loop knit for extra padding and comfort. We re-enforced the Heal and Toe and added support in the middle of the foot and above the ankle to ensure a proper fit every time. We are really excited about these new socks and we are sure you will be too! Available in Charcoal Grey and Fawn - Hypoallergenic, Undyed, Made in USA with N. American Alpaca Fiber!
Contents: 80% Alpaca, 15% Nylon, 5% Lycra

When you have a free moment be sure to check them out at Golden Touch Naturals.

Thanks!
Posted by Golden Touch Farm at 12:21 PM No comments: