Believe in Miracles - They do happen!

Friday started off as any typical day, morning chores where done so we decided with such beautiful weather we would take the boat out and do some fishing. We had a great day on the ocean and returned home around 4:00pm.

As always when returning home from an outing the first thing I do is a check on Mothers and new cria. Upon my entrance into the barn I saw a newborn cria laying lifeless in the hay with membranes still covering his face. Immediately my heart sunk and I flew over the railing, when I touched him he was cool, not breathing and had no pulse. Mom was a first time mom and she was very distraught.

I was not hopeful at all but instincts kicked in and I cleared the membranes off his face and then swung him upside down to clear any fluid that might be in his lungs. I then began CPR and mouth to mouth. After a couple of minutes he gasped his first breath. At first I couldn't believe it but it was actually him coming to life. Not only was mom standing over my shoulder watching me but twenty other alpacas witnessed this miracle with me.

I continued working on him until his breathing was at a regular rate, dried him up and put a coat on to help get his temperature up. I put him in a stall and proceeded to focus on mom and getting her in with her new son.

With my adrenaline pumping from what just happened I looked at mom and realized not only was the placenta hanging she had a prolapsed uterus. The uterus was hanging about a foot out from her body. I got her into the stall with her new son and then ran in to call the vet. I got my vets voice mail and when he didn't call back in 10 minutes I knew I needed a back up plan so I put a call out to my secondary vet.

Thankfully I was on the phone with her in 10 minutes and she said she would come but it would take her a while so in the mean time I was to keep the uterus as clean as possible, rinse with clean water and coat it with sugar. Sugar helps shrink the size making it easier to put back. While waiting for the vet I worked at getting this new little miracle baby nursing and was successful. I am still amazed when I think how quickly he bounded back to life. Mom was very cooperative despite how uncomfortable she was. She also let me milk her to get more milk for the little guy.

When the vet arrived she too was amazed at the cria and how he had rebounded. While mom was lying down she made her first attempt at replacing the uterus without success. Mom was still contracting and would put it out as the vet was trying to get it back in. We decided to give mom a little sedation to help relax her and then make another attempt in a standing position. If that was not going to work then off
to Tufts University we would have to go for surgery.

The second miracle happened when she got the uterus in and it stayed. The vet then sutured her vulva closed and she was started on antibiotics and Banamine for pain and inflammation. The next 12-24 hours were critical. I stayed in the barn for most of the night making sure the cria was nursing and that mom was not trying to expel the uterus. I am happy to say both mom and her son are doing wonderful, better than any of us expected. Mom is not totally out of the woods yet but we are all very optimistic. Her sutures will be removed tomorrow and the antibiotics will continue for the rest of the week. Providing no complications she'll be good as new. the jury is still out on the new little guys name but I promise you it will be a special one. Here is a picture of this bundle of joy. 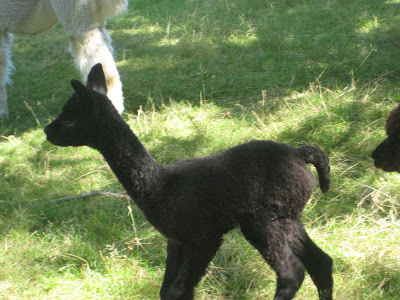 What a wonderful story, thank you for sharing!

That is a great story! Will keep them in our thoughts and prayers that both continue to do well!! Congratulations on a new member of your extended family :-)

It truly was a miracle! I love the books by James Herriot like All Things Bright and Beautiful. This story reminded me of one of his vet stories. Loved it!